WANT MORE COOL CONTENT? DONATE TO MY BLOG VIA KO-FI!

It should really go without saying that I am the queen of taking breaks from blogging and just being a creator in general. What can I say? I often find myself feeling so uninspired- it’s easier for me to create content for my Instagram than it is for a physical blog, which often leads to me taking away time from writing blog posts…for months on end. Yikes.

Now, *shocker*, I spend a LOT of time on the internet, like way too much time that I wouldn’t fully admit to my doctor the true answer when he asks how many hours a day do I spend staring at a screen. And it got me thinking:

If I’m able to spend all this time online, why not do something productive with it?

It took me a bit of time to come to this conclusion, but the reason why I was so often frustrated and uninspired when it came down to content creation was because I didn’t have a support system of sorts to bounce ideas off of.

Believe me, I’ve been through my fair share of Instagram group DMs, or Pods, as the kids call them nowadays, but I never found them to be as interactive as I wanted to be. You would just drop a link to your latest post and go- hardly any networking whatsoever.

I knew that trying to network in-person would be difficult, since there are hardly any bloggers where I go to school; everyone’s either obsessed with their own Instagram and/or Snapchat- if I’m lucky, I’ll find someone that makes their own YouTube videos, but never a traditional blogger. As a result, I had to turn to- you guessed it – the internet.

Having no idea where to start, I ultimately ended up Googling ways to network with other bloggers (this took forever, may I add) until I somehow reached an article about the importance of Facebook groups in the blogging world. 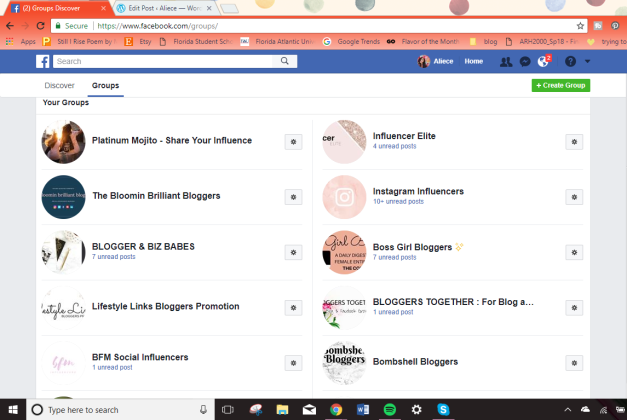 Keep in mind that at the time, I hated using Facebook more than any social media out there, mostly because the only people that were active on it were people that I knew from high school. I had never considered using it as another platform to grow my website and later on, my Instagram account.

I had no idea that joining different Facebook groups (I joined general blogging groups and then later on became a part of groups with my specific niche or bloggers who were also located in Florida) would drive traffic to the very site you’re on right now.

The better Facebook groups, in my opinion, are the ones that have an open forum for fellow bloggers to discuss anything from issues with editing photos to which social plugin will help increase their site traffic, rather than those that only have themed threads with which social links to share on which day.

While social threads within a group can increase viewership and engagement on various social media networks, I honestly prefer open forums where I can get advice and input on potential blog post topics and additionally get to know other bloggers in my niche which results in knowing some pretty cool people to turn to in times of creator crisis.

As a result of joining several groups, I found myself more motivated to create and post content on all of my platforms. I’m genuinely enjoying writing posts again now that I’m fresh and chalked full of ideas thanks to all of the help I’ve been receiving.

Being active within these micro-communities of sorts has also led to me being more active on Facebook in general, creating a Facebook page specifically for my blog, which actually just reached over 100 likes a few days ago. 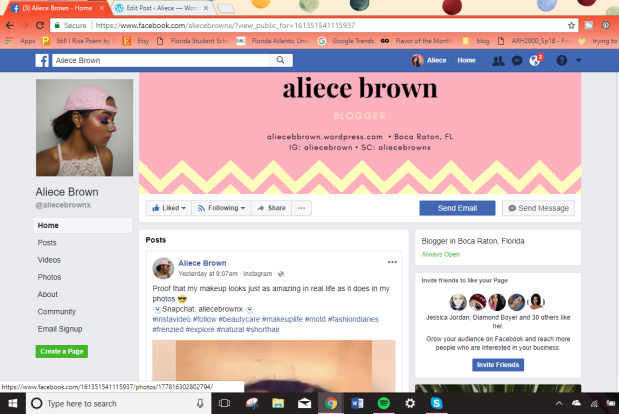 Being able to network has re-sparked my love for creating and I’m excited to see where else it takes me (hint, hint: it gave me an opportunity to work with a company on an upcoming sponsored post… just saying).

If you have any networking tips or want to share some positive networking experiences, feel free to leave them down in the comments below. I actually do actively read through all my comments on every post, mainly because I don’t have much of a life outside of the internet, ha!

WANT MORE COOL CONTENT? DONATE TO MY BLOG VIA KO-FI!

20 year old Communications major at Florida Atlantic University with a love for writing and networking! View all posts by Aliece Brown

18 thoughts on “Networking Changed my Creative Outlook…FOR THE BETTER”

There was an error retrieving images from Instagram. An attempt will be remade in a few minutes.